There are now nine weeks to go until Race to The Stones and suddenly training has a very long feel to it. The weekend after Sid’s Morph Marathon was “only” a 20 miler! But then it was time to take a big step up in mileage.

Nick and I had entered The Marlborough Downs Challenge, a local trail race. There was a choice of a 20-mile or 33-mile route. Being cautious I wanted to enter the 20-miler. Nick doesn’t do caution, he just wanted to kick its back doors in and show it who was boss. That is how I came to be standing nervously on the start line of a 33-mile ultra-marathon. The longest race either of us had ever done!

We got our first taste of the ultra-running community at registration. No fancy runners’ goody bag or rucksack here. Just a complimentary slab of Kendal Mint Cake and a knowing look.

Ultra runners are an earnest crowd, but very friendly. As we walked from registration at Marlborough Leisure Centre to the start line in the grounds of Marlborough College they regaled us with stories of how far they could run without water or their latest 100-mile run, without a hint of triumphalism. We suddenly felt a long way out of our depth.

We didn’t help ourselves. Rather than keep a low profile and blend in, we attracted lots of strange looks as we posed for a start line selfie to post on Facebook. I think these two ageing triathletes were something of an enigma to the ultra-runners.

Bang on 9.00am we were off. Somehow I never doubted that the start would be punctual.

It started with a long steady climb and within 15 minutes we were looking down on Marlborough and heading out onto the downs. We were blessed with almost perfect running conditions – blue sky, 150C and a light breeze. It was a lovely clear morning and the views out across Wiltshire were breath-taking.

One thing you get lots of on an ultra-run is time. Nick is a countryman and so to fill the time, I was treated to a running commentary on the birds, the wild flower meadows and the state of the local crops (Nick’s speciality). It passed the time perfectly. After a long drag along the tow path of the Kennet and Avon Canal heading into Devizes, we were suddenly at half way where we celebrated with a Waitrose pork-pie. Apart from slightly aching feet, it was so far so good. But that wasn’t to last!

There was a check point roughly every four miles whose first job was to confirm you were still alive and then feed and water you. Up to Check Point 4 we had always had other runners in sight and so had paid no attention to the route. Suddenly the field had spread out and there was no-one as far as the eye could see, but we just kept running. We first discovered we had gone wrong when we came to a dead-end in some woods. For the first time all day the detailed route instructions came out – all 8 pages of them! We retraced our steps and eventually saw some other runners and were able to re-join the route having only run about an extra half mile.

The next big task was the long climb up Cherhill Down, the site of the White

Horse. Next to the white horse is The Lansdowne Monument, a stone obelisk that you can see from miles around. All the way up Nick was grumbling that the organisers had failed to use the obelisk as a navigation feature in the directions. At no point did the alarm bells in my head ring to warn me that there was a good reason why they weren’t mentioned. Lost again!

We recovered from that small deviation and from the top of Cherhill Down we hit a big chalk path that took us down to the main A4 on the floor of the valley. We could see the A4 in the distance and so assumed we just ran until we got there and so put the directions away for a while. Bad move. We sailed past a crucial turn and got horribly lost, our best yet!

When we hit the A4 and the directions didn’t match what we were seeing, we decided to just run along the road until they did. That would have been a great 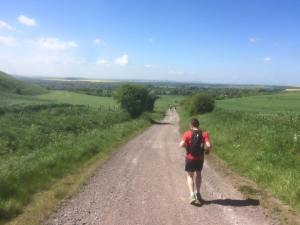 plan if we had turned the right way along the main road. Instead, unbeknownst to us, we were running the wrong way and away from the race. It was only an eagle-eyed marshal spotting us as he drove past that saved our bacon. To cut a long story short we had run about a mile the wrong way which we had to retrace before we could start making progress towards the finish. After 23 miles of running, that was a heart breaker. From that point on we kept the directions in our hands and read them carefully at every turn. Motivated by sore feet, we didn’t get lost again!

We ran most of the rest of race on our own. Inevitably in 33 miles of running (or 35 in our case!) we each had a low point, but not at the same time and so we managed to keep the show on the road.

As we left the last check point we had 3 miles remaining. By now the biggest challenge was two sets of very sore feet and it became a game of picking the softest surface to run on, usually the grass verge. 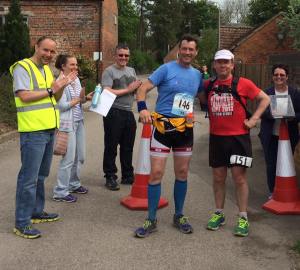 Slowly but surely we ticked of the last 3 miles and found our way to the finish line. By the time we got there it was literally one man – not even his dog. We had to rope a few bystanders in to give our finish line photo a bit of atmosphere. You could hear them muttering under their breath: “triathletes”.

And to round off our day in the world of the ultra-runners the final peculiarity. No finishers medal here, just a mug. But not any old mug. It is a mug which says we are now ultra-runners.